The production of resins from Cuyolen® and Cuyotec® Polypropylenes is carried out in the gas phase Novolen process.

Propylene, ethylene and/or any of the other comonomers used are fed into the reactors.
Hydrogen is added in order to control the molecular weight in the middle of the reaction. Polymerization conditions (temperature, pressure and reactant concentrations) are selected depending on the polymer grade to be produced.

The reaction itself is exothermic. Reactor cooling is achieved by the transfer of heat by the decompression (flash) of the mixture of liquified gas from the reactor with feeding currents.
Liquids evaporation in the polymer bed ensures the most efficient heat exchange.

The polymer powder is discharged from the reactor(s) and separated in a discharge cyclone at atmospheric pressure. Any unreacted comonomer is separated from the powder and compressed. It is then either recycled or returned to the upstream distillation unit for recovery.

The polymer is mixed with nitrogen in a purge silo in order to remove the residual propylene.
The purge gas is recovered, the powder is transfered to the powder silos. Finally, the powder is converted by extrusion into pellets that incorporate a full range of well-dispersed additives.

This unit produces propylene of polymer grade with a purity of over 99%. Its raw material is a type of Propane-Propylene of the country main refineries.
The process begins with the removal of impurities in a series of machines since those impurities seriously affect the efficiency of the Polymerization catalyst.
Then, in a deetanizing column, light gases are removed, some of them also affecting the polymerization.


A distillation column of 280 plates separates the propylene from propane. This column operates with Heat Pumps, with which high energy efficiency is obtained since a compressor removes the gases from top of the column and uses them to heat its bottom. At the same time, the pressure in the column is reduced and, then, the separation is improved.
After the separation, many guard beds avoid impurities to reach the Polymerization stage. 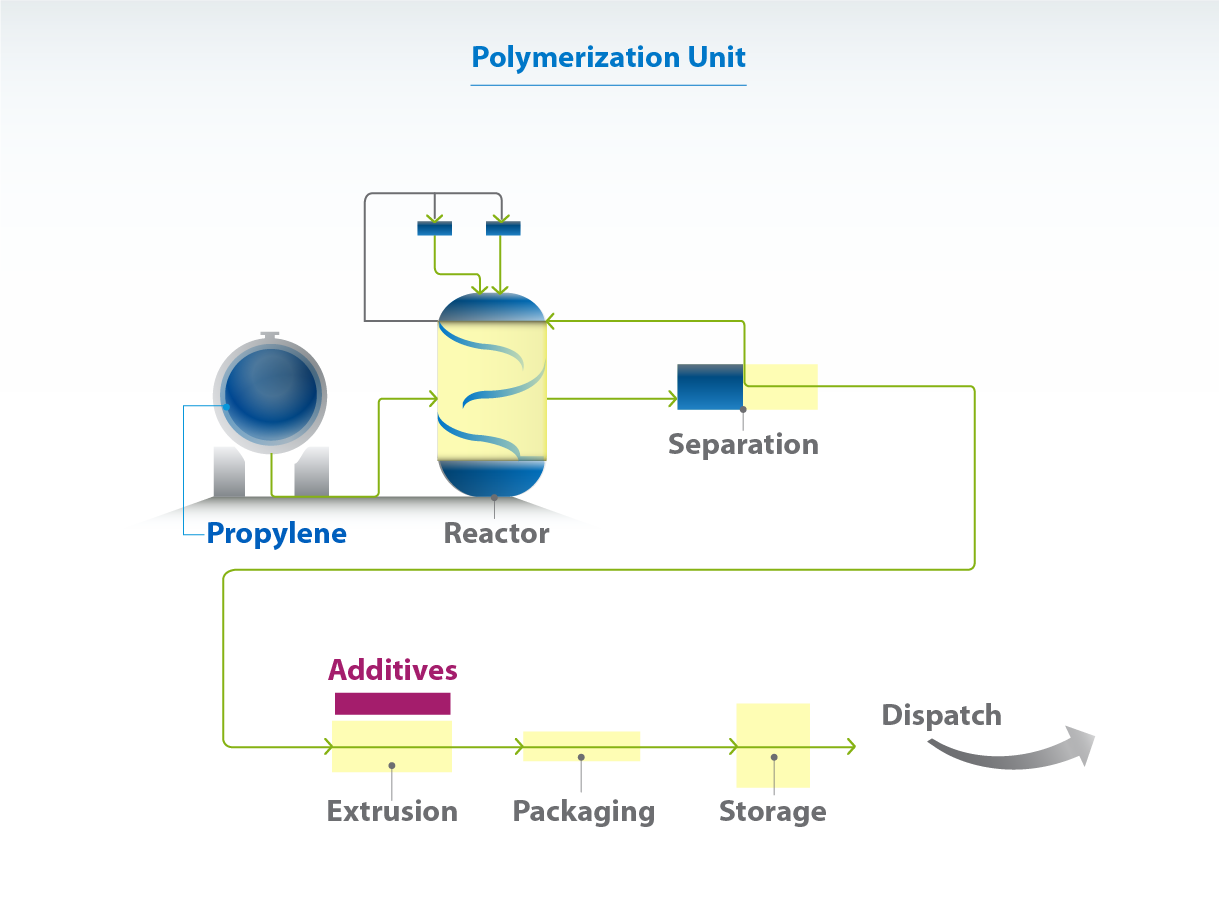 The heart of this unit is the reactor of stirred tank type which operates steadily. Ziegler Natta catalysts, fresh propylene and hydrogen are injected to it which adjusts the molecular weight of the distributed polymer.
The propylene polymerization releases heat that is removed by boiling and condensing the propylene with water.
At this stage, propylene granules are formed around the catalyst particles. The mixture of polypropylene powder and non converted propylene is removed from the reactor. After the propylene is evaporated, it is sent to a series of separating containers where polymer degassing is finished.
EThe propylene that does not finished completing the polymerization reaction is condensed in a subsequent step and injected again into the reactor. 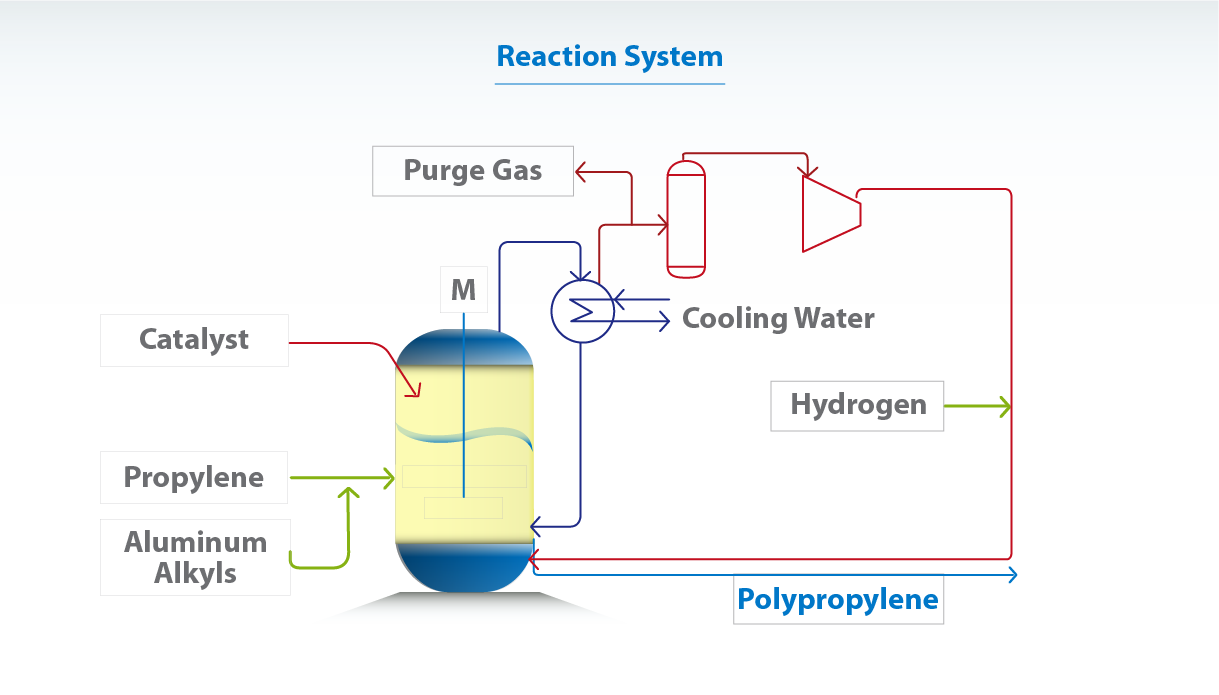 Polypropylene could not be traded after Polymerization stage since it degrades easily and needs different additives according to the application. That process is done in this unit.
The main equipment is the twin-screw extruder with 5000 KW motor power. The polypropylene powder is melted and mixed thoroughly with different additivies. The melted material is extracted by a gear pump that forces them through a perforated plate where the polypropylene pellets take their final trade shape.
Some applications require a polymer with certain specific features, called Controlled Rheology. The distribution of molecular weight of chains is altered by cutting the long ones. This process is also perfomed in the extrusion stage through the injection of organic peroxides. 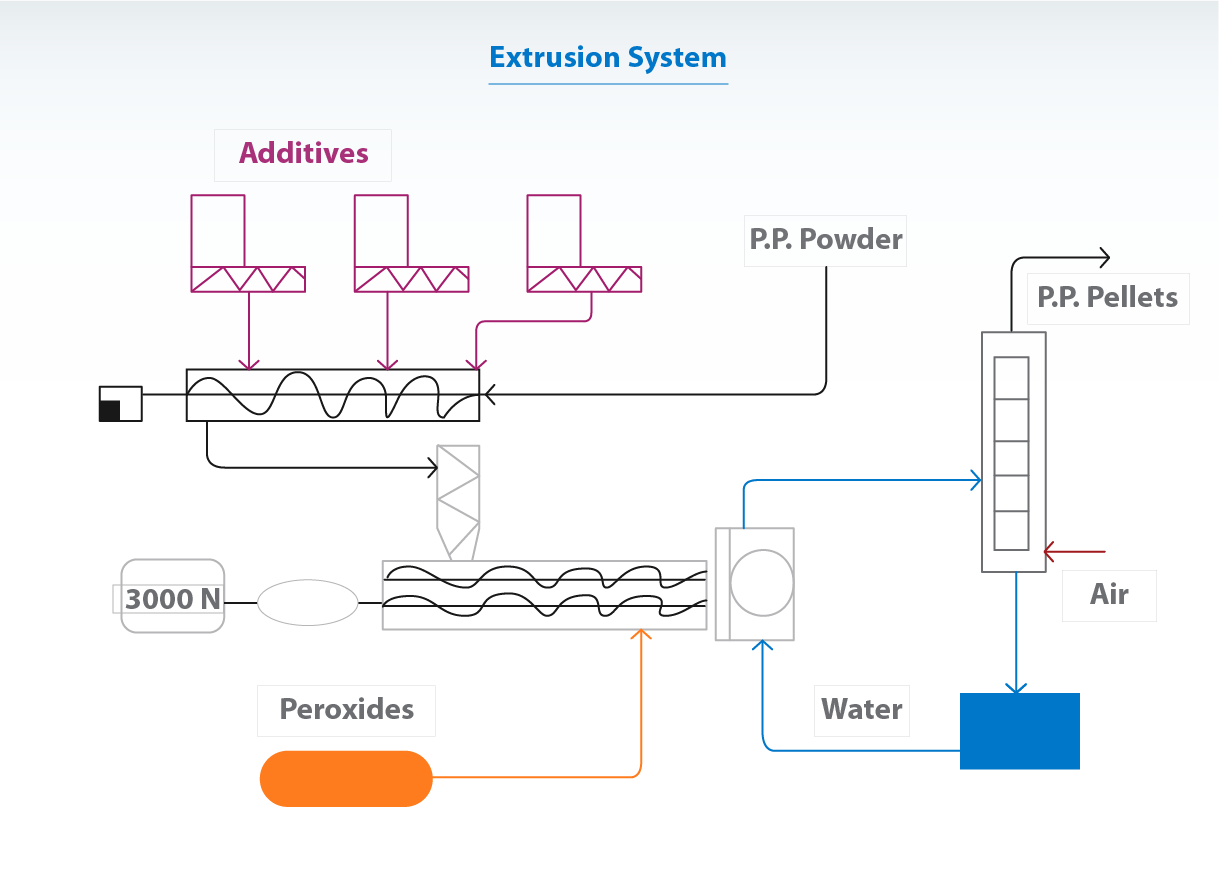 Pellets from extrusion stage are sent to a silo system where they are mixed and stored. The mixing and blending process allows for uniform and consistent quality. The product may be dispatched in bulk or packs of 25kg in an automatic filling and palletizing line. 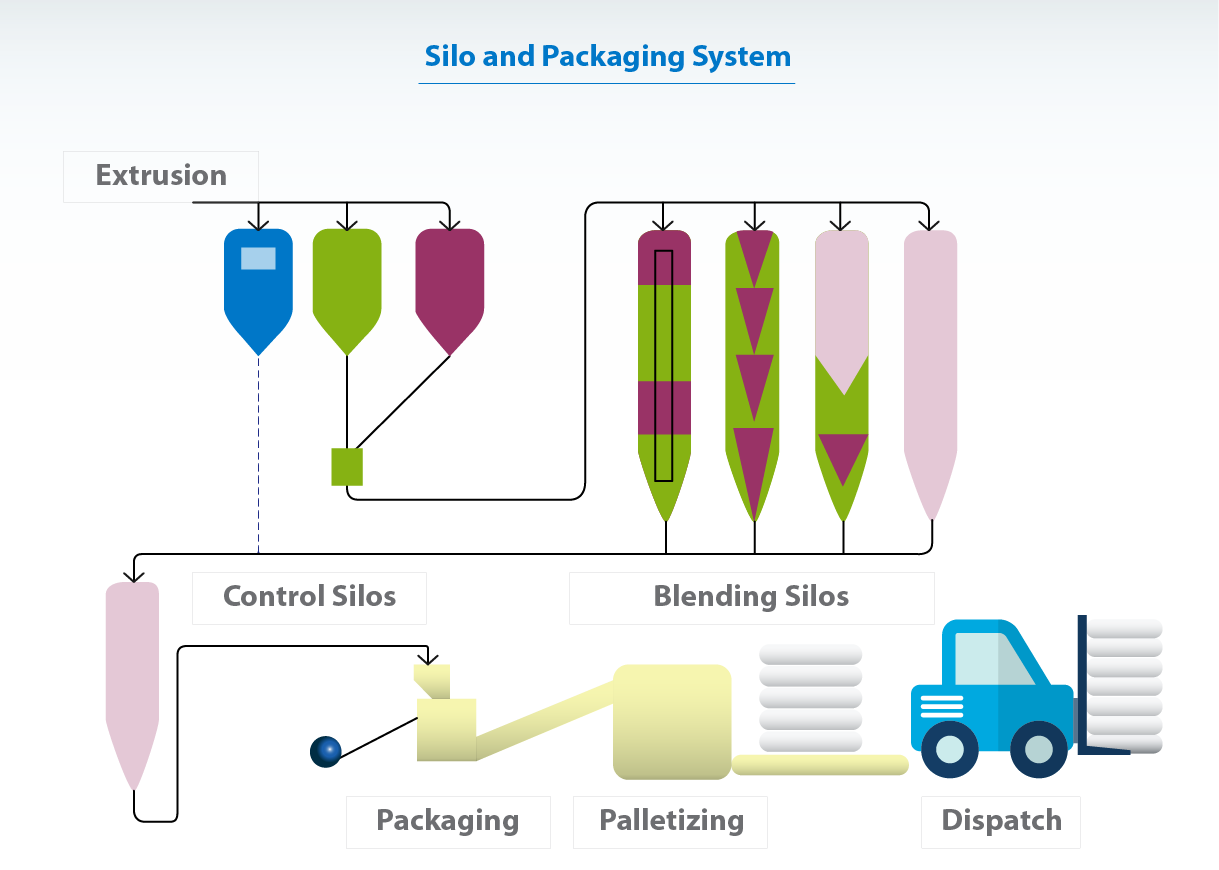